The official Twitter account for National File has been suspended for 12 hours after the outlet dared to report on a viral tweet thread about the death of a teenager after taking the COVID vaccine.

National File reported on Monday morning on a viral Twitter thread from the aunt of a 13-year-old boy from Michigan who passed away only three days after receiving his second dose of the Pfizer brand COVID-19 vaccine. Preliminary autopsy results indicate that following his vaccination, the boy’s heart has become enlarged and surrounded by fluid, a symptom similar to those documented in other teen boys who have experienced severe and potentially lethal side effects following their COVID vaccination.

“A week ago today my brother’s 13-year-old son had his 2nd covid shot,” Jacob Clynick’s aunt, Tami Burages, posted in a tweet, providing a photo of his vaccination card for proof. “Less than 3 days later he died.” She added, “The initial autopsy results (done Friday) were that his heart was enlarged and there was some fluid surrounding it. He had no known health problems. Was on no medications,” the post continued. Ms. Burages added that she was “pro-vaccine,” and even had her own 14-year-old son vaccinated, but still demanded a CDC investigation.

A week ago today my brother's 13-year-old son had his 2nd covid shot. Less than 3 days later he died.

The initial autopsy results (done Friday) were that his heart was enlarged and there was some fluid surrounding it. He had no known health problems. Was on no medications. pic.twitter.com/5q3jnF6okQ

Following publication of the story, the official National File Twitter account posted a link to the story with the caption, “a 13-year-old boy is dead after taking the Pfizer COVID-19 vaccine, and his aunt, who is very pro-vaccine, is demanding an investigation from the CDC.” However, within 3 hours of publishing the tweet, the National File account was locked out for 12 hours, with Twitter claiming that the tweet violated their rules, and specifically their policy on “spreading misleading and potentially harmful information related to COVID-19.” 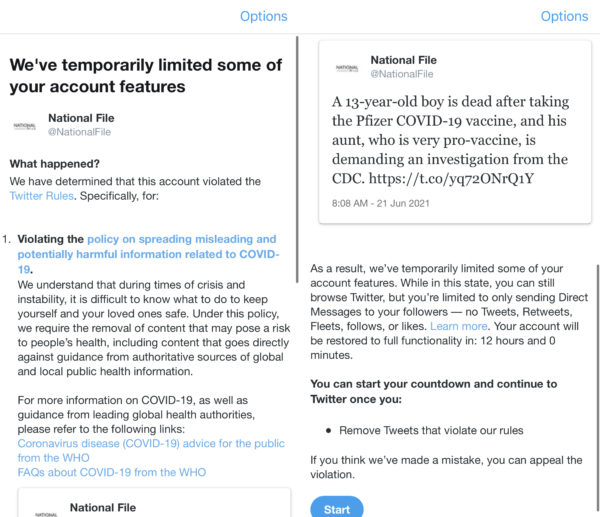 “Twitter’s censorship here is as repugnant as it is ridiculous,” said Editor-in-Chief Tom Pappert. “National File does not publish medical misinformation. We published a report containing direct quotes from a woman who – using Twitter – expressed concern about the death of her 13-year-old nephew, Jacob Clynick, which occurred after he received the Pfizer COVID-19 vaccine,” he continued.

Pappert noted that Burages is a “vaccine advocate who has used her Twitter account since 2017,” and that it was “disturbing” that National File was censored while her tweets remain on the platform. “It appears Twitter is attempting to censor news outlets for the crime of reporting on the concerns of a recently bereaved family member,” Pappert said.

“Our hearts and prayers are with Ms. Burages and her family during this difficult time. It is very unfortunate that Twitter would attempt to prevent this family from sharing its truth and its concerns about the Pfizer COVID-19 vaccine only days after Jacob’s untimely and heartbreaking death,” Pappert concluded in the statement.

In an email, National File asked Twitter if they believe that factual reporting of a story, based on a thread on their own platform, constitutes misinformation, and that if they do disagree with National File’s reporting, which specific points amounted to “misinformation.” National File also inquired as to why Ms. Burages’s tweet thread remains on the platform, while a news report on the story has been removed. National File did not receive a response from the time of publication. This article may be updated with the response.

This is not the first time that Twitter has removed prominent accounts relating to their COVID-19 policy. National File reported earlier this month that the  the Informed Consent Action Network, an organization dedicated to increasing informed consent regarding vaccinations, was locked out of their Twitter account twice in 24 hours after they publicized that they had acquired 2,957 emails sent from Anthony Fauci, with the Big Tech platform claiming they violated their COVID-19 policy. After National File’s reporting, Twitter claimed that they had suspended the account “in error.”