An event called “Prove Me Wrong” featuring Turning Point USA founder Charlie Kirk did not go according to plan at the University of Houston on Thursday, as Kirk was booed off stage by a contingent of young conservatives chanting “America First!”

Kirk and other prominent conservative commentators have found themselves entangled in a conflict with the “Groypers,” a loose assortment of young conservative activists who believe their concerns on immigration and social issues are ignored by the Republican establishment in lieu of currying favor with the Left.

Kirk dedicated the majority of his rhetoric at Thursday’s event towards his current feud with paleoconservative livestreamer Nick Fuentes.

The TPUSA founder, who has not shied away from labeling critics as “ethno-nationalists,” was asked by a young African-American student about previous tweets by Kirk that were disparaging towards President Donald J. Trump. 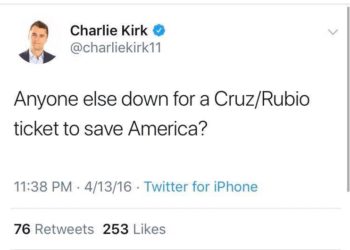 Kirk responded to the question by unveiling a hidden television and announcing that he would play a video of Fuentes making negative remarks about Trump in 2015.

The TPUSA video team had technical difficulties playing the requested footage, and the clip itself was apparently unconvincing to the conservative students, who booed Kirk off campus and chanted “America First!” until he disappeared from view.

Kirk is currently in the midst of a complex fragmentation war within the MAGA community, as many young conservatives view TPUSA as social liberals using Trump branding to secure power and influence.

FOX News host Tucker Carlson even made a veiled reference to Kirk’s “stapling green gards to diplomas” statements in a monologue on Monday.

The negative backlash appears to induced a profound ideological shift for Kirk, as in a speech for his “Culture War” – spelled “The Cuture” on his website – tour on Tuesday he apologized for his neoliberal views on the F1 visa program.

“I’m gonna do something not a lot of people in politics are comfortable doing,” Kirk said. “I’m gonna admit I was wrong about something.”

Gabriel Keane
Gabriel Keane is the managing editor for National File. He sometimes contributes to the Memelord For Hire Gab account at gab.com/memelordforhire
@[email protected]
'Bite Your Tongue!': Elizabeth Warren Lashes Out At CBS Panel When They Bring Up Biden's Abysmal Approval Ratings
VIDEO: Dana White Shuts Down Angry Journalist Who Yelled 'Are You A Doctor' After UFC President Praised Ivermectin
'Fugazi': Joe Rogan Says 'A Lot Of F**kery' Is Going On At GETTR, He 'Wants To Get Off' The Platform
BREAKING: FBI Official Says 'Sir, I Can't Answer That' When Directly Asked If Ray Epps Was A Fed
CDC Director Says 75% - An 'Overwhelming' Majority - Of COVID Deaths Occurred In People With At Least Four Comorbidities
See more...
Advertisement