South Carolina incumbent Congressman William Timmons says the United States should maintain membership in the United Nations, despite the organization’s public ties to the Lucis Trust, an “occult” group founded by a “Luciferian” scholar.

Timmons recently wrote a letter explaining his support for the foreign aid the United Nations distributes, which “millions throughout the world are dependent on for their everyday needs.”

In February 2020, Republican Congressman William Timmons (SC-04) was pressed on the United States’ membership in the United Nations (UN) by a concerned South Carolina constituent named Evan Mulch, who cited the globalist leanings of international governing authority and urged the Congressman to support a bill terminating America’s relationship with the organization.

Mulch informed the Congressman that the UN has a spiritual Meditation Room, located within the United Nations Headquarters, which he alleged was affiliated with the Lucis Trust, an ostensibly luciferian nonprofit formerly known as the Lucifer Publishing Company.

Mulch handed the Congressman a letter, which detailed his concerns over the Meditation room, as well as his belief that U.S. membership in the UN is unconstitutional.

Congressman Timmons replied “I find it hard to believe that there is a Satanic ritual room at the UN,” and told Mulch that he would respond to his concerns in writing.

In March, Congressman Timmons wrote back to Mulch, explaining his support for the United Nations, despite the U.S. contributing “an unfairly large portion of the U.N.’s budget relative to other member nations” and “how often the organization pursues policies contrary to American values.”

Congressman Timmons further signaled his support for US foreign aid to the UN, and explained that “time and effort would be better spent improving” the globalist international body “rather than abandoning it.” 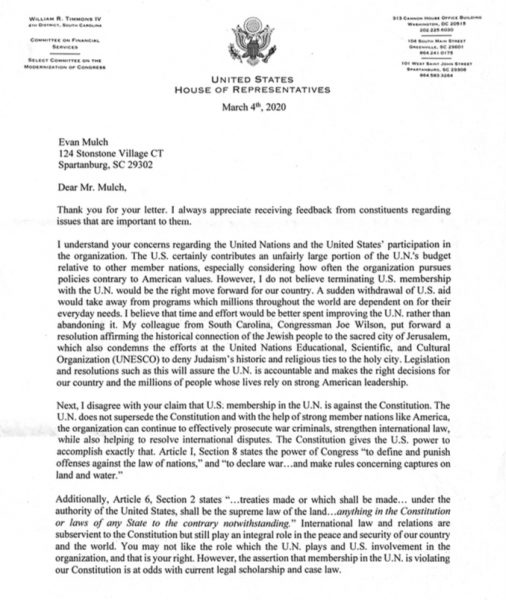 A particularly bizarre claim that Congressman Timmons made was that UN resolutions “affirming the historical connection of the Jewish people to the sacred city of Jerusalem” inhibits the UN from denying “Judaism’s historic and religious ties to the holy city,” adding that this somehow assures Americans that the UN is “accountable and makes the right decisions for our country.”

Congressman Timmons disagreed with Mulch’s idea that U.S. membership in the UN is unconstitutional, claiming that with “strong member nations like America, the organization can continue to effectively prosecute war criminals, strengthen international law, while also helping to resolve international disputes.” 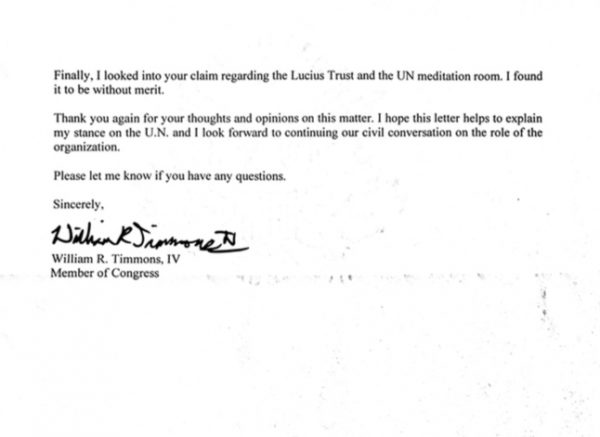 “Finally, I looked into your claim regarding the Lucius Trust and the UN meditation room. I found it to be without merit,” claimed Congressman Timmons. It is unclear if the Congressman’s misspelling of “Lucis” was intentional or by accident.

It is also unclear what Congressman Timmons meant by “without merit,” given that the existence of the UN Meditation Room, located within the UN Headquarters, is verifiably true.

According to the UN itself, the room was was opened in 1952 and designed by artist Bo Beskow at the direction of former UN Secretary General Dag Hammarskjold. In the original plan for the exhibit, a tiny room had been provided as a place “dedicated to silence, where people could withdraw into themselves, regardless of their faith, creed or religion, but Dag Hammarskjöld wanted something more dignified,” the UN claims.

Per the UN, the room reopened in 1957 with a new and strange design, containing “an abstract mural, a composition of interlocking geometric patterns which is supposed to evoke a feeling of the essential oneness of God,” including a 6.5 ton iron ore altar that Hammarskjold claimed represents “a meeting of the light, of the sky, and the earth… it is the altar to the God of all.”

The bizarre exhibit is claimed to be dedicated to “the God whom man worships under many names and in many forms.”

National File is unable to confirm Mulch’s claims that the UN Meditation Room is directly managed by the Lucis Trust at this time.

However, National File can conclusively confirm that the Lucis Trust does have what appears to be a tightly knit, extensive relationship with the UN, and publicly advocates for people to “meditate” within the confines of the room.

Corruption of all kinds has plagued the United Nations for decades. One UN official called the problems “endemic” and “getting worse, ” according to Pass Blue, an independent UN watchdog.

The scandals range from corruption in management and oversight, to sex abuse in-country, to outright theft, graft, and even their own “hashtag” MeToo internal sex abuse scandals.

The United Nations Oil-For-Food Scandal was a disastrous failure in which more than $46 billion worth of Iraqi oil was sold, the profits of which were to be used securing humanitarian aid in Iraq. Instead, Iraqis siphoned off $10 Billion USD, a staggering amount of money, much of which went straight to Saddam Hussein and his Baathist cronies, among other nefarious uses.

Even the New York Times and former Fed Chairman Paul Volcker was staunchly critical of the UN for their scandalous handling of the millions of dollars.

The United Nations Child Sex Abuse Peacekeeping Scandal is an ongoing scandal that continues to plague the UN, even as recently as 2020.

PBS News says there “have been more than 1,700 allegations of sexual abuse” by UN peacekeepers over the past 15 years.

The exact number of countries the UN Sex Abuse scandal has plagued is not known. However, countries like Haiti, Cambodia, Mozambique, Bosnia, and Kosovo are among the confirmed victim nations.

The UN Sex Abuse scandal is so widespread and pervasive that it has caused a moniker to be coined for the children conceived in rape: “Peacekeeper Babies.”

The Washington Post — not known for giving international aid programs a hard time — reported that the “U.N. system responsible for handling and prosecuting such cases has been widely criticized as dysfunctional.”

ABC referred to the revelations of abuse in 2015 as “the violent sexual abuse of children,” in which soldiers abused boys between the ages of eight and fifteen.

Having been made aware of the scandal, the UN failed to take action to stop the abuse, resulting in a whistleblower leaking the internal report to the press.

Congressman Timmons doesn’t believe the connection between Lucis Trust and the United Nations is enough cause for concern to merit the U.S. leaving the UN.

According to the Lucis Trust website, the organization had opened an office in Geneva, Switzerland in 1951, “in a building close to the United Nations” for many years. The Geneva office was eventually relocated to “Rue Stand in the business district, close to the lake.”

In addition, the organization’s New York office is “located in a building overlooking the United Nations.”

In fact, the Lucis Trust boasts its support for the UN, and claims to have “Consultative Status with the Economic and Social Council of the United Nations (ECOSOC).”

A puzzling remark in the statement by the Lucis Trust regarding “meditation” and their support for UN reads as follows:

“Since their inception Lucis Trust and World Goodwill have given [the UN] their support through meditation, educational materials and seminars, by highlighting the importance of the UN’s goals and activities as they represent the voice of the peoples and nations of the world.”

“The creation of an enlightened public opinion begins with the individual. Educate yourself about the United Nations and its activities, as well as the requirements for a harmonious world order,” read a portion of a Lucis Trust webpage with the title Supporting the Work of the United Nations.

“Groups and individuals that value the power of thought are encouraged to support the United Nations through meditation, invocation and prayer. Learn about the Meditation Room at the United Nations which is open to the public when the UN Headquarters building in new York is open. From time to time World Goodwill’s Cycle of Conferences Initiative focuses on important meetings and summits at the United Nations. See also the Group for Creative Meditation’s, ‘Become a UN Delegate Through Thought’ ; the Spiritual Caucus at the UN in New York; the NGO-Alliance at the UN in Geneva; and the Aquarian Age Community web materials on the UN,” the webpage continued.

Among other questionable subjects found within the obscure AQUAAC website, such as THE NEW WORLD ORDER AND THE WORK OF THE UNITED NATIONS, located within a section titled The Spiritual Foundation of the United Nations, the seemingly Lucis Trust-sponsored AQUAAC has a newsletter called Diamond Light: Newsletter of the Aquarian Age Community, where a particularly disturbing piece was published specifically about the UN Meditation Room.

In that newsletter, the authors state “as with any truly occult or spiritual symbol, this [UN Meditation] room represents more than meets the eye.”

“It is replete with significant symbols, and the numerology, astrology and sacred geometry that are all a part of this very small room radiate their own silent but powerful spiritual vibrations, invoking the Soul of those who seek to work through this organization for the benefit of humanity and the planet,” the newsletter wrote.