Andrew Torba, the free speech pioneer and CEO of Gab, announced the birth of his child, Samuel Titus Torba, earlier this afternoon in a post shared on Gab.

“Overwhelmed with Grace, Joy, and Love. Thank you Father God for this most precious blessing,” wrote Torba earlier this afternoon in a post accompanied by a photo of him cradling the newborn. Earlier, he shared another post announcing the birth. “Samuel Titus Torba was born today at 2:26pm. 6 pounds 11.4 ounces, 18 inches,” wrote Torba. “Mom and baby are both doing great. Praise the Lord, thank you for the prayers!” 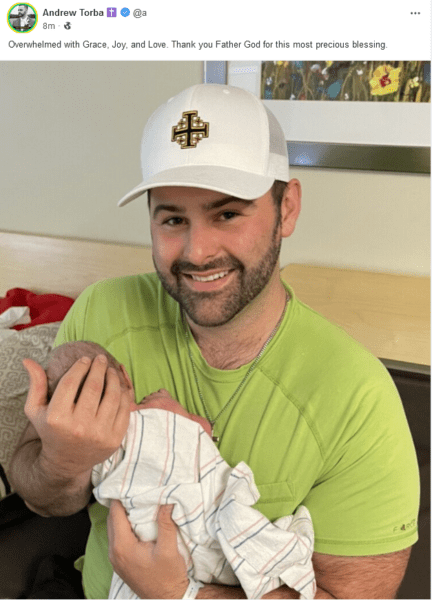 In the early hours of the morning, Torba announced that his wife went into labor, and requested prayers for the safe birth of his son. The post garnered over 11,000 likes, 1,100 comments, and 1,100 reposts. (READ MORE: VIDEO: Gab CEO Andrew Torba Lays Out Case For Why Big Tech Darling Ben Shapiro Is ‘Controlled Opposition’)

Gab’s popularity has continued to soar in the months since big tech websites Facebook and Twitter banned President Donald Trump from their respective platforms. Earlier this week, Torba shared that Gab’s growth is on pace to equal or eclipse Twitter at its current rate. “I don’t know if you guys realize this, but Gab actually isn’t too much smaller than Twitter and will soon pass it if you’re comparing only US traffic,” wrote Torba. “The vast majority of Twitter’s users are international. When you subtract the botnets I estimate that Twitter has somewhere around 40 million people from the US who use it, of which 30 million are inner city far-left liberals.”

“Gab has 18-20 million people using our various services, Gab Social, Gab TV, Gab Trends, and Dissenter, every month. Gabbers are high IQ people with families, jobs, and massive purchasing power,” he added. “Give Gab another year or two and it won’t be unreasonable to assume that we will have more US users of our services than Twitter. Also once we launch Gab Ads it will be one of the best places on the internet for conservative-friendly brands to reach their customers.” He concluded, “Social media is rapidly Balkanizing and Gab is going to be the corner of the internet that defends free speech.” (READ MORE: TORBA: Kushner Wouldn’t Allow Trump on Gab Unless He Banned Criticism of Israel)