Karlyn Borysenko claims that Critical Race Theory is merely racist, but not anti-white, and tried to get a journalist fired for disagreeing.

Karlyn Borysenko, who first revealed anti-white diversity training offered to Coca Cola employees, and later removed from the Internet after National File’s reporting, now says that Critical Race Theory is not “anti-white” but is merely “racist” instead, and is seemingly attempting to get a conservative journalist fired for disagreeing with this distinction.

Borysenko began to attract negative attention on Saturday after she claimed that calling critical race theory “anti-white” is playing into the hands of white supremacists. When multiple prominent pundits, including veteran journalist Cassandra Fairbanks, who recently accepted a job as Tim Pool’s editor-in-chief, rebutted her claims, Borysenko began accusing them of attempting to cancel her.

Fairbanks originally shared a video of Borysenko threatening to block “Anyone who says that Critical Race Theory is antiwhite” with the caption, “Can the left take her back please. Ew”. Borysenko later posted a screen shot of this tweet and mocked Fairbanks’ career as a journalist.

Karlyn: (has been talking about the Mises Caucus for months and sharing Libertarian drama for the past week+)

Cassandra: CAN SHE JUST GTFO OF THE GOP ALREADY????

Fairbanks doubled down in another tweet in which she lambasted the Republican Party for aligning itself with Borysenko. “She’s not my ally,” wrote Fairbanks. “She’s the vile trash that the GOP is becoming because nobody has the goddamn spine to tell anyone to f*ck off.” Borysenko – who only left the Democrat Party late last year – rebutted that she is no longer a Republican, which she says will “lose perpetually” if it listens to “people like” Fairbanks, who she seemingly also characterized as part of the “corruption” present in the Republican Party establishment.

She’s not my ally. She’s the vile trash that the GOP is becoming because nobody has the goddamn spine to tell anyone to fuck off. https://t.co/OsyUb4EI5R

Fairbanks later mocked Borysenko’s seemingly histrionic response to a disagreement on Twitter, a website Rush Limbaugh once referred to as a “political sewer”, in another tweet. “‘Someone made fun of me in a tweet. I’ve been cancelled! Give me money please!’ – that walk away weirdo lady,” wrote Fairbanks.

“Someone made fun of me in a tweet. I’ve been cancelled! Give me money please!” — that walk away weirdo lady.

Then, this morning, Borysenko posted a public tweet tagging Fairbanks’ new employer, Tim Pool, that seemed to urge him to fire Fairbanks. “@Timcast: we’ve had our differences, but no f**king around, your new editor Cassandra is supporting this, either implicitly or explicitly. Maybe she doesn’t realize it, I have no idea.” She added, “PLEASE look into this and do the right damn thing.” Ten minutes before this tweet, Borysenko claimed that “Maybe Joe Biden is right when he says white supremacy is the biggest threat” to the United States, but added that the administration is wrongly “focused on nonsense systemic racism” while what she is “talking about here is ACTUAL racism.”

@Timcast: we’ve had our differences, but no fucking around, your new editor Cassandra is supporting this, either implicitly or explicitly. Maybe she doesn’t realize it, I have no idea.

But PLEASE look into this and do the right damn thing. The rhetoric around it needs to stop.

Borysenko later claimed she was not suggesting Pool fire Fairbanks, but instead that Pool institute an editorial policy that would require Fairbanks and the website’s staff of writers to refer to Critical Race Theory as “anything” but anti-White.

Borysenko later found a podcast, which is available on YouTube, that seemed to reinforce her beliefs that the phrase “anti-white” is empowering white supremacy, which then prompted her to launch into a vulgar tirade against those who disagreed with her. “Go fuck yourself Cassandra Fairbanks, go fuck yourself Bryson Gray, go fuck yourself to everyone else who took a video of me out of context,” launched Borysenko. “Fuck all of you, and fuck all of you that have been proceeding with this rhetoric over and over and over again.”

Earlier this year, Borysenko developed an intense Twitter feud with former Republican Senate candidate Lauren Witzke, and later celebrated when Witzke was banned from Twitter for referring to a transgender woman who claimed that small children are sexual and, thus, should have no problem sharing a bathroom with a person born with a penis as “demonic”. (READ MORE: Wells Fargo Cancels Lauren Witzke’s Bank Account, Leaves Her Stranded Out of State With No Money)

In her Telegram channel, Witzke wrote, “Now this clown is trying to go after one of the best conservative journalists the Right has,” noting Borysenko’s apparent attempt to influence Pool to fire Fairbanks. “Cassandra Fairbanks has been a champion for America First and now this grifting LIAR is trying to get her fired from her job. It’s time for the Democrats to take Dr. Karl back. We don’t want her, nor do we need her.”

Witzke also referred to Borysenko as “controlled opposition” whose “entire purpose is to subvert and destroy” in a post containing a photo of Borysenko posing with Biden administration Transportation Secretary Pete Buttigieg – who was then running for President – while wearing one of Buttigieg’s campaign hats. 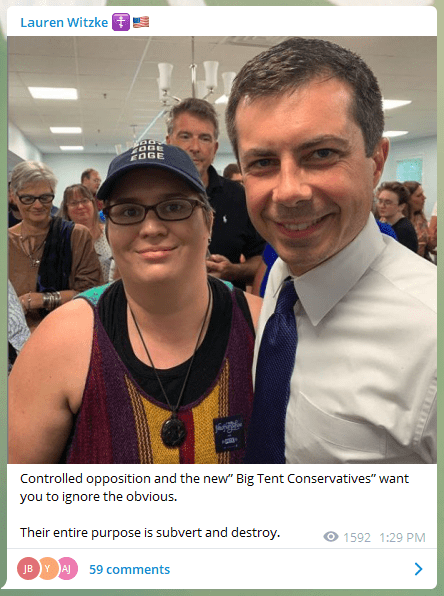 Witzke also provided National File with what appears to be a deleted tweet from Borysenko, who now considers herself to be a libertarian. “I don’t care about winning election,” wrote Borysenko in the apparently deleted tweet. “But a nice bonus will be pulling enough votes away from your favorite candidates so that you lose too.” At press time, Borysenko appears to have transferred her aggression from Fairbanks to American Greatness journalist Peter D’Abrosca, who was recently had his bank accounts canceled by American multinational finance company Wells Fargo.

You are not one of us. You will never be one of us. We do not want you. https://t.co/fealNDcnYa

So @DrKarlynB left the Dems and left the GOP in a matter of months?

Sounds like she’s untrustworthy and a liability to whichever movement she’s part of at the moment.

Also, you’re not important enough for me to cover, Karen! pic.twitter.com/c9upToB2IO