In an unanimous decision made by the Sixth Circuit Court of Appeals in Cincinnati, Ohio, the Centers for Disease Control and Prevention (CDC) exceeded its authority by temporarily halting evictions amid the pandemic. 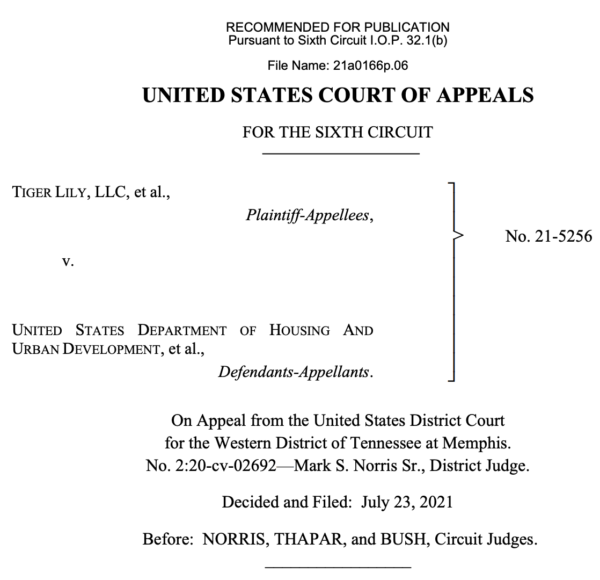 Judge John Bush wrote in his opinion, “Instead, Congress must “enact exceedingly clear language if it wishes to significantly alter the balance between federal and state power and the power of the Government over private property…..The absence of any such clarity in § 264(a) indicates that the CDC cannot nationalize landlord-tenant law.” He went on to say that under the existing statutory authority “The CDC can do anything it can conceive of to prevent the spread of disease. That reading would grant the CDC director near-dictatorial power for the duration of the pandemic, with authority to shut down entire industries as freely as she could ban evictions.”

The eviction moratorium, which was enacted September 2020, was extended until July 31, 2021. This allowed tenants to stay in residential properties without being evicted or removed by landlords. According to Joshua Kahane, the lawyer who argued the case for a property manager, judges in Tennessee, Kentucky, Ohio and Michigan are no longer bound by the moratorium. (READ MORE: BUSTED: Black Rifle Coffee Magazine’s Editor Donated To Biden, High Profile Employees Gave To Democrats)

“There is one thing both [landlords and tenants] deserve: for their problems to be resolved by their elected representatives.”

A federal court ruled that @CDCgov overstepped its authority by enacting an #EvictionMoratorium during the #Pandemic. https://t.co/EYJRxa10u4

Having CDC intervene in private rental contracts which are governed by state law was probably the most blatantly unconstitutional thing that happened in the past year. I called it out at the time. Glad to see the courts are too.https://t.co/mYbkEmuRmi

Many landlords have faced financial hardship, foreclosure and borderline bankruptcy as a result of the CDC’s decision to allow tenants to remain in their rented homes for months on end without paying, even as they remained culpable for mortgage payments and other costs associated with property ownership.