The City of Chicago will continue pursuing its lawsuit against disgraced Empire actor, Jussie Smollett, for wasting $130k over Smollett’s hate hoax.

Jussie Smollett, found guilty of five felonies by a Chicago jury, is being sued by the City of Chicago for executing an “elaborate hoax staged by Smollett and two acquaintances.” The city is seeking $130,106.15 in the lawsuit.

“The City filed a civil lawsuit against Jussie Smollett to recover costs incurred by the Chicago Police Department investigating what the City believed to be Smollett’s false police reports that he was a victim of a hate crime,” a statement from the city of Chicago said.

The statement continued, “While using a different standard of proof, the jury’s finding of guilt convicting Jussie Smollett of criminal charges stemming from the incident confirms that the City was correct in bringing its civil lawsuit.”

During the investigation, the city logged 1,836 overtime hours for more than two dozen police officers.

Trending:
OFF SCRIPT: Biden Jabs 'What A Stupid Question' When Asked About Putin, Believing He Was Off Mic

Jussie Smollett tried to countersue the city but the case was dismissed. U.S. District Court Judge Virginia Kendall told him that he would be able to refile the charges if he was found not guilty after the trial.

The two brothers that Smollett hired to assist his hoax, Abimbola Osundairo and Olabinjo Osundairo, have filed defamation lawsuits against Smollett over their damaged careers and reputations.

A federal judge put the defamation lawsuit on hold until the completion of the Jussie Smollett sentencing, and asked the parties to file a status report with the court by Feb. 1, 2022.

City of Chicago says it’s still going after Smollett for that $. Especially after the guilty verdict pic.twitter.com/zdtCXT5c1S 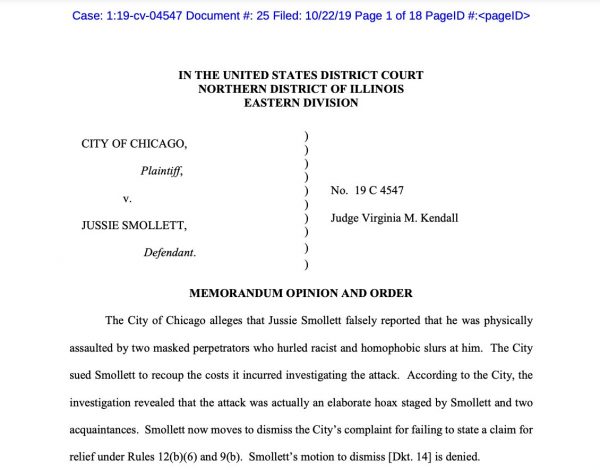