The two famous German Shepherds have been removed from the White House after a "biting incident" occurred with White House Staff.

Joe Biden’s German Shepherds have been removed from the White House and sent back to Delaware after exhibiting “aggressive behavior.”

The two dogs, Champ and Major, were frequently photographed during the early days of the Biden Administration. The dogs drew the attention of a strange, recently suspended Twitter account known as The Oval Pawffice, which would post images Biden’s pets using childish language to mock Republicans and promote the administration, as National File reported.

However, by Monday, the dogs were no longer in the White House. “The two German Shepherds,” wrote reporter Ana Cabrera, “were returned to the Biden family home in Delaware last week after aggressive behavior at the WH involving Major Biden.”

Major, the 3 year old, younger of the two, has been known to frequently exhibit agitated behavior on the White House grounds, including jumping, barking, and charging at White House staff, according to reports. Major was supposedly involved in a “biting incident” with White House security, prompting the White House to subsequently remove both dogs and return them back to Wilmington, Delaware.

“I’ve been getting obsessed with getting our dogs settled because we have an old dog and we have a very young dog,” Jill Biden said on the The Kelly Clarkson Show. “They have to take the elevator, they’re not used to that, and they have to go out on the South Lawn with lots of people watching them. So that’s what I’ve been obsessed with, getting everybody settled and calm.”

Champ, the older of the two, is around 13 years old and has slowed down due to his age. National File is unable to confirm whether or not Champ has partaken in aggressive behavior like that of his counterpart, Major. 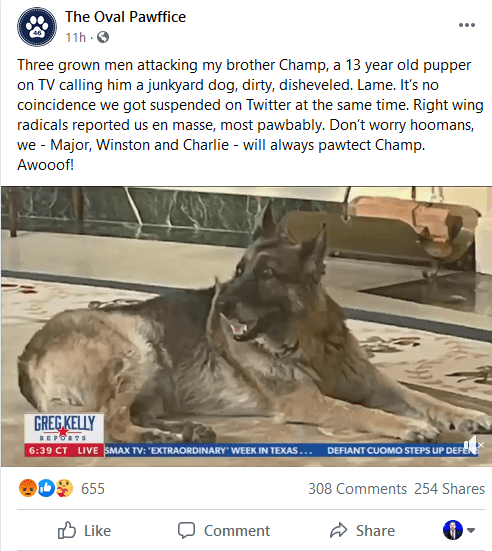 For now, the two dogs remain in Delaware. It appears that Americans will have to live without the canine photo ops until Major proves to the White House that he can behave himself around their staff.